Java allows you to access static members, static members are class level and can be accessed directly without any instance. For example. The static keyword means that the variable or function is shared among all the instances of that class since it belongs to the type, not to the real objects themselves.

In this way, the utilization of such variables should be possible to keep up a basic count of created objects or objects that access a class.

A static class in Java, created within a class is called a static nested class. It is unable to access non-static data methods and members. It can be accessed by an outer class name. You can access the static data members of the outer class, including private ones. 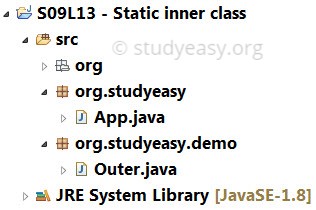 Here the properties of the inner static class are shown and also how they can access the outer class variables and methods is shown.