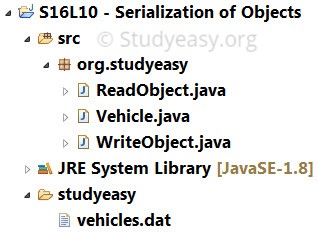 Now that we have made the class eligible for serialization, the next step is really to serialize the object. This is done by calling the writeObject () method of the java.io.ObjectOutputStream class.

Object restoration occurs with the call to the obj.readObject () method.  readObject () can read any serializable object, a conversion to the correct type is required.

11.09. Sorting and Reversal of Elements