In 1990, Sun Microsystems launched a project called Green to develop software to consumer electronic products. Gosling began to write software in C ++ to embed elements such as toast, VCR and personal digital assistants (PDA). The history of java started from Green Team. In this team, there were three members James Gosling, Mike Sheridan, and Patrick Naughton protecting the language started in June of 1991. 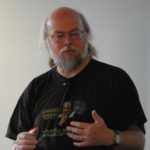 It was named as “Greentalk” by James Gosling.  The file extension was “.gt”. Later it was called Oak. Oak is a national tree of many countries like the U.S.A, France, Germany, Romania etc. In May 1995, Oak was renamed as “Java” given by James Gosling, by then it was already a trademark of the organization.

There were more choices of names before finalizing, but Java was so unique, so James and most of his team members preferred Java.

A more interesting fact is related to Java, Java is an island in Indonesia where the first coffee was produced and the name of the coffee was Java. Java is a name, not an acronym.Java coffee consumed in large quantities by the creator of the language. This indicates the story behind the logo of Java.

Java was invented for interactive television but it was more effective and advanced for the digital cable television industry. currently, Java is used in internet programming, cell phones to portable devices, games and navigation systems for e-business solutions. It is also used in Embedded systems, Web Applications, Web Servers and Application servers.